In 2013, I was lucky enough to win a bursary to attend the IRSE International Convention in Sweden and Denmark.  Applying for scholarships, bursaries and free spots at conventions/conferences/meetings is a brilliant way to travel without having to spend your boss’s training budget or your own cash and I would highly recommend it to your all!

This was the write up for the first day of the convention.  And one of my very first blog posts!

VARNING: This post contains content that may bore some readers who haven’t yet embraced the awesomeness of railway signalling…

Today, I was tasked with writing up the day’s events for the IRSE magazine. I took my assignment seriously and took lots of notes (which I am trying to transcribe now – I can’t remember the last time I wrote something other than my signature and the date) and took lots of photographs of items of interest.

Last night, we were given detailed instructions for which door of the conference centre to enter by (that is, not the one that says St Gertrude’s Conference Centre, in Swedish, the one that says something else entirely irrelevant). 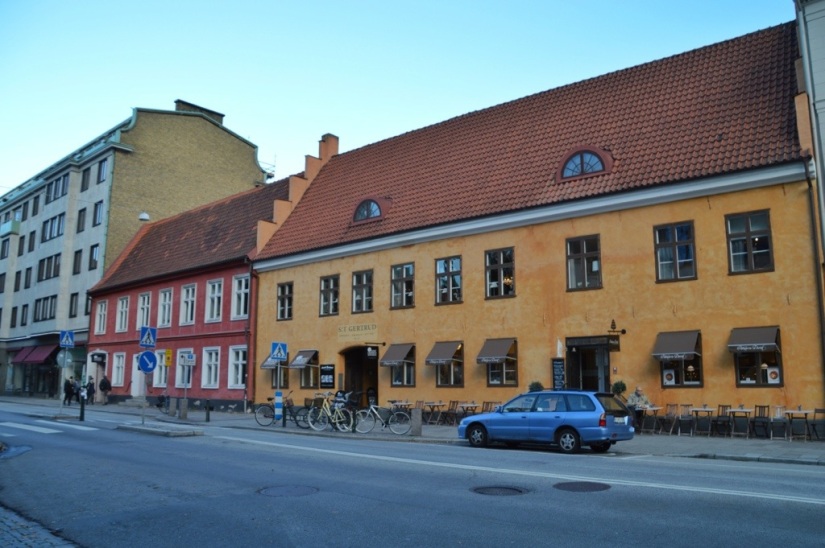 I followed these instructions and was rewarded with a lovely little courtyard and then, the opening address for the convention. 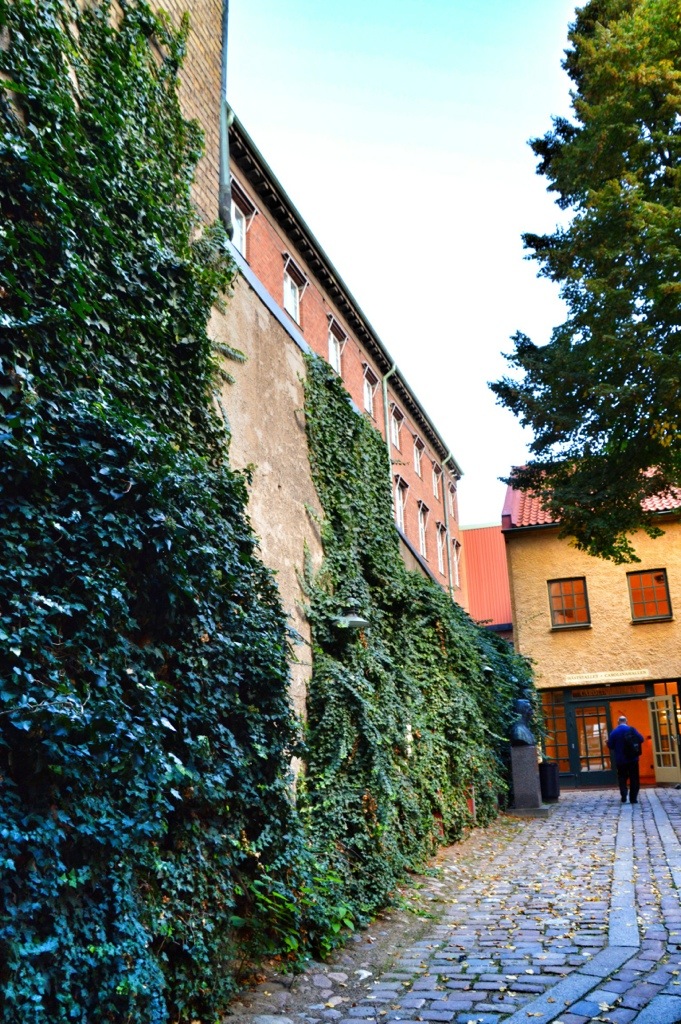 I was allocated to group A1 (the best group, obviously) which meant that our first presentation of the day was from the Operative Chef (a real Swedish chef!) of Trafikverket, who unfortunately was just the equivalent of a COO and not anything to do with the culinary arts. His presentation spoke about how Trafikverket has 94,400km of road and 11,900km of railway monitored by 4 road traffic control centres and 8 rail traffic control centres. One of the things that stood out was the Swedish railway principle that means that trains that depart and travel according to their timetable take precedence where their timetable is threatened by an already late-running train.

After this presentation, we walked to the Malmö Control Centre to see the real thing:

The control centre was going through a refurbishment so a lot of it was still under construction. Looking at the offices that had already been done, and the lime feature walls that had been painted in the works in progress, it’s going to be a beautiful, inspiring space, quite different to any other control centres I’ve seen before. We wound through the construction warren, being distracted by promising signs (below) and were instructed to wait in a room, “make yourselves at home and take off your clothes”!

We were given the opportunity to look at the train controllers through some glass and had an explanation of the roles of the staff who sit in the control room. The most noticeable difference from the Mayne Control Centre is that everyone looks very happy and relaxed and casual, in their bright coloured hoodies and jeans, though I think that this might be a general Scandinavian quality, not just limited to train control staff.

We then headed down a spiral staircase to the “cellar” where all the interlockings are kept. Our tour guide even admitted that this wasn’t best place to keep them as it had flooded before – they still keep photos as a reminder: 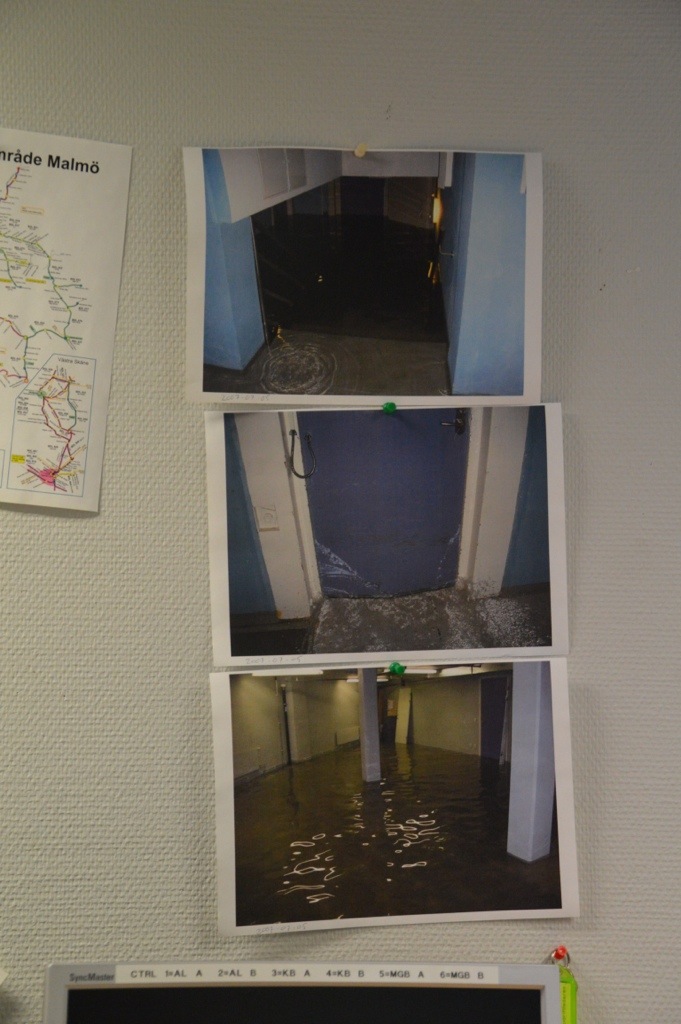 We posed for some photos with the racks with flashing lights and received an explanation of the interlockings and their cloud connection. The most fascinating thing that I saw was a hardware independent interlocking which had a Red Hat Linux platform. 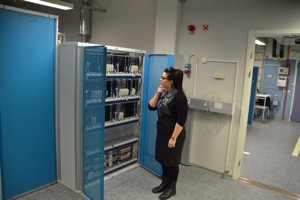 We then returned to the hotel for a presentation about the Malmö City Tunnel Project. Malmö was originally the station at the end of a line that travelled through some residential areas. The tunnel project allowed a new alternative route to be created underground, adding some additional stations as well. The underlying principle of the underground tunnel option was that travelling underground must be as safe as travelling in the open air. To achieve this, there are 5 emergency exits on the line and for the whole length of the tunnel, there is a small platform that allows passengers to detrain at any point if there is an emergency. 100% of the tunnel is covered by cameras, applying the technology from a South African giraffe counting system to detect trespassers. We also discovered that the Swedish acronym that covers railway infrastructure equipment is “BEST”. How appropriate!

For lunch, we were served a traditional buffet, featuring the tastiest mushrooms I’ve ever eaten, in a rustic dining hall in the conference centre: 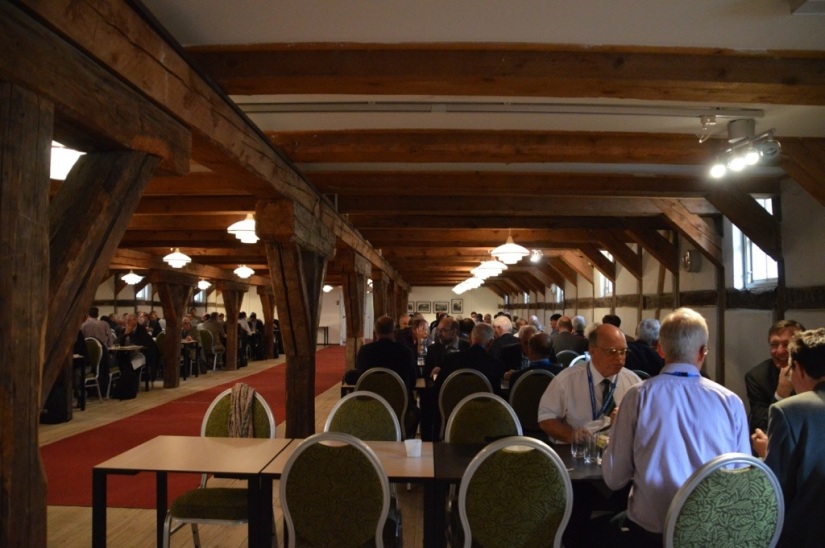 In the afternoon, we had more presentations from Trafikverket and Bombardier, revealing how Sweden has been a leader in the early adoption of a lot of modern signalling equipment. One interesting fact that I learnt the reason why the Swedish Railway Rules and Regulations were written in English. In 1856, the Köping Hult Railway imported British drivers and other staff because they wanted to use experienced people to make their railway a success in the beginning. I was also surprised by the protection breakdown for the level crossing in Sweden where 35% don’t even have passive protection. However, on the other end of the scale, their use of obstacle detectors with full booms has meant that there has never been a collision at a level crossing with this combination of protection.

This evening, after some initial confusion about the meeting place, which we sorted out by looking at my photos from yesterday, I met up with some of the other younger members for dinner. It was almost like being in a joke because I was with an Englishman, Irishman, Scotsman and a fellow Aussie…

(The Irishman was taking the photo.)
Dinner was incredible. Everything we ate was brilliant. I had carpaccio, Danish cider, Swedish meatballs and beautifully foamy hot chocolate.

I’m so glad I went out for dinner and got to have a gossip with like-minded signalling fans but it has meant that it’s now quite late and past my bedtime. To sleep, perchance to dream (about level crossing obstruction detectors)!

View all posts by yvettegriggs