The above pie chart is a graphical representation of my ethnic heritage. The most prominent piece of the pie is Chinese.

I grew up in Townsville, what I thought was a big city but what actually would be described as a regional centre. It wasn’t really a melting pot kind of scenario, more like a fruit loaf – mostly white with a few raisins and bits of peel around the place to make it a little more interesting, but the extras not really dissolving into the mass.

Making a criticism of the diversity and acceptance of this place wouldn’t be right, strictly speaking, because, in fact, there was a particularly large Italian community, but being Italian was not seen as being any different to being of English descent (which, I suppose, it isn’t).

I had very few friends with “exotic” ethnicity and I was singled out for being different. I remember being chased around the playground with jeers of “Monkey Magic!” ringing in my attached-lobed-ears. When blowing out the candles on my 8th birthday cake, my wish was to have brown hair, just like everyone else. I had my heart broken when my crush told me that Asian chicks just didn’t do it for him.

Around the time I completed high school, I experienced a clichéd awakening of pride in my cultural heritage. I dove into Amy Tan, Adeline Yen Ma, Jung Cheng novels and filled myself with passion, sorrow, foot binding, intrigue, tragedy, adversity and triumphant resilience built upon the deep ties with the women who came before you and those who stand next to you; relationships between mothers and daughters, and relationships between sisters (of blood or otherwise).

I searched for a term to describe these books which are semi-biographical but mostly fictional works by female authors of Chinese heritage but the google search didn’t yield. For want of a better term, I’m calling it “chai-fi” (rhymes with sci-fi) a sort of muddle of sounds from the phrase “Chinese American fiction”. (I was sort of toying with “submit lit” due to the selfless and oppressed nature of the heroines but I think that it would have been confused with 50 Shades of Grey and its younger gimp sister, Twilight, so it was abandoned.)

My first chai-fi was The Joy Luck Club which I experienced both as a novel and film several times. If you’ve not yet experienced these stories, they are about four Chinese mothers and their four Chinese-American daughters. The stories span from the mothers’ childhoods in pre-cultural-revolutionary China to their daughters’ marriages and divorces in the early 90s.

I remember mentioning to my mother than Lindo was just like her, boasting about her daughter’s achievements unabashedly through the street. My mother disagreed and said that Lindo was just like Grandma, making a fuss at the hairdresser due to her reluctance to make a fuss. I’m sure from the outside, we are much more similar than we can admit to being.

I would talk about each of my favourite chai-fies for pages and pages like a never ending yum cha sitting, but I’m going to try to get back on track and talk about the film that my mother and I watched last night, Snowflower and the Secret Fan. 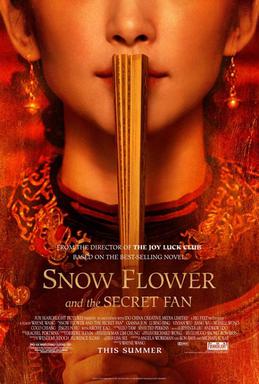 By all accounts this is a fantastically researched book, and I’ve taken the short cut by only seeing the film. Despite this fact, I have been able to gather that the story of Snowflower and her relationship with her laotong, Lily is particularly pertinent to the modern professional woman.

The laotong is a formalized, ancient Chinese version of BFFs (Best Friends 4eva). Communication between laotong is through a secret written syllabary, nu shu, which only women could read. I can’t describe the concept any better than the author of Snowflower and the Secret Fan, so please read this excerpt from Lisa See about her educated interpretation of the laotong ritual:

At age seven, a girl had her feet bound. From that time until she married out to another village at age seventeen, she lived in an upstairs room with only one window. When she went to her husband’s home, she spent the rest of her life in similar upstairs rooms, again with only one window from which to view the world. So, from the age of seven until their deaths, these women lived as virtual prisoners—hobbled by their bound feet and illiterate in men’s writing. Still, even in their solitude, they longed to express themselves and find consolation from other women in identical circumstances. They used nu shu to write letters, stories, and poems. It was “hidden” in embroidery, in weaving, and in paintings on fans. Women wrote about their joys, which were few, and their sorrows, which were many.

Two types of relationships developed that had nu shu at their core. The first was called a sworn sisterhood. The other type of relationship was called a laotong —old same. When a woman had a daughter about to turn seven and begin her footbinding, she would meet with a matchmaker, not to find a suitable husband but to look for another girl in another village who could match eight characteristics with her daughter. The two girls had to match birth dates, be in the same birth order in both families, have the same size foot, and the like. Obviously, this was much harder to find than just linking up with other girls in the same village. If a prospect could be found, the two girls would be brought together to sign a contract matching them for life as a pair of old-sames. At seventeen, the girls would marry out to other villages, have children, and follow the normal course of their lives, but they would also continue to keep in contact with their laotong through their writing and occasional meetings for their rest of their lives. This type of “emotional marriage”—at a time and in a culture when emotions didn’t enter into marriages between men and women—is what I wanted to write about with the characters of Lily and Snow Flower.

Working in engineering can be very isolating if you have few or no female peers. The site experience is very different for a lone engineeress, from say, the pack of fierce female truck drivers with whom I used to share a change house.

Trying to communicate with the women in your family or those who were your schoolmates about the unique difficulties (and joys) of your work doesn’t always give you the satisfaction that talking with a kindred spirit could.

It can be exhausting to continually justify why you live in a metal box, spend your time underground like a mole woman, put up with sexist apes and spend time away from your loved ones for the pursuit of EJSJNSQ* (engineering-job-satisfaction-je-ne-sais-quoi), something intangible to most.

Many of us are lucky enough to have an engineeress laotong, someone with whom she can share her whole self, her losses, her wins, her doubts, her dreams, without fear of judgement. We are very fortunate in the age of social media, that one can communicate with ones’ sisters instantly despite being remote. Some engineering ladies have the wonderful and enviable ability to be self sufficient or to connect deeply in a platonic way with the males around them. But some of us need (and deserve) a sister-in-arms who gets us.

After we watched Snowflower and the Secret Fan, I told my mother I was planning to write this blog.

I said in my own unrefined way, “The whole friendship over distance thing is really, you know, like what we need!”

My more eloquent mother added, “It is far more than that. It is the longevity of the relationship commitment which is really paramount to the narrative.”

“So it’s basically friendship through time and space…”

“Precisely!” Mum agreed, not getting the Doctor Who reference and returned her attention to her iPad.

In my mother’s words, I think that it is paramount that we foster and celebrate engineering lady friendships across space and time so that, as a community of Hedy sisters, we can look out for each other. If you want to tag us, like our page, start up a conversation, email us directly, or write us secret messages in code on a fan, we’d love to hear from you, especially if you feel like Snowflower, alone in a dark room, not able to stand on your own two feet and walk out into the sunshine.

But if you happen to be alone in a dark room by choice and want some reading material, here are some of my favourite chai-fies:

* I’d call the reason we do what we do “engineering bliss” but Sarah thought that was a bit too hippy. So I came up with the more STEMish acronym EJSJNSQ. It’s when you leave a meeting on a high after having given someone the best advice to fix their issues; when you finally dream up a perfect solution that also halves the budget; when you write a spec which you know will shape the future of your whole asset base; when you teach a graduate something and their eyes light up and it all comes together; when you go to a party and they are in awe that you can be both a gorgeous woman and a brainy engineer and want you to tell them all about how something works.

View all posts by yvettegriggs

1 thought on “The Laotong: Friendship through time and space”